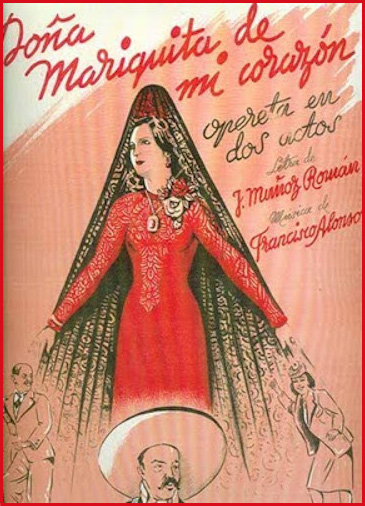 Synopsis: The Marquis, lover of Paz but infatuated with Mari Tere, tries to shake off the former, arguing that he is awaiting the arrival of Doña Mariquita (a rich Mexican widow) who is coming to marry her son Javier off to Marisa, the daughter of the Marquis. Paz, disgusted, reports it to the Marquise the infidelity of her husband. In the course of corroborating this story, the latter discovers the rogue Ubaldo, disguised as Doña Mariquita, and Paz and Mari Tere who pretend to be his daughters.

After some complicated and rather convoluted situations, the arrival of the real Doña Mariquita will serve to clarify everything: Paz and Ubaldo are discovered, Marisa will be able to marry the son of Doña Mariquita, who is none other than Adolfo, her fiancé, who pretends to be a famous movie actor. And Don Leo, brother of the Marquesita, who had fallen in love with the false Mrs. Mariquita, will be shipped off to Buenos Aires, where they tell him that this lady is living.

Set in San Sebastián at the time of the premiere, Doña Mariquita de mi corazón develops a convoluted plot rather in the style of vaudeville in terms of the overall structure of the piece and yet it is more like a sainete in terms of the plot, although in all honesty, it is clearly an operetta if take into account the spectacular presentation and for the competition between the vedettes, vicetiples and boys as fundamental elements of the piece.

With a lively dialogue and comical scenes, the author employs the typical resources of ‘entanglement’: transvestite characters, disguised, dozy absent-minded characters, who adopt other personalities. It was a great success and managed over 2,000 consecutive performances.

Among its most attractive musical numbers are the “Tiroliro”, presented as a Portuguese dance, a “Mexican Corrido” taking full advantage of the origin of the protagonist, a “fox” that becomes a showy number of cabaret in which Adolfo is besieged by his admirers, the well-known “Pirate’s Song” and the impressive “Madrilenan Holy Thursday”; in which Francisco Alonso shows his creativity by managing to blend the typical rhythm of processional parades with the panache of a pasodoble.