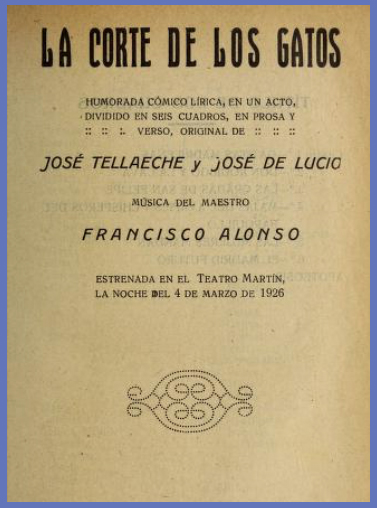 Synopsis: A “castizo” from Madrid, because of the effects of considerable quantities of alcohol, falls asleep at the door of the Academy of History and, led by Clío, takes a stroll through Madrid of bygone eras.

The book of The Court of the Cats was described by the critic as interesting, curious and entertaining, with the necessary racy elements demanded by the public of the Teatro Martín.

The work, presented with the usual luxury of these shows, enjoyed a catchy and pleasant music. Of all the show’s different numbers, all of which were repeated on the day of the premiere, the “chotis” was most praised, not to mention a “pasodoble” that concluded as a bolero, some “boleros” that were sung by Mr. and Mrs. Bori and Mr. and Mrs. Rodríguez, the well-known and apotheosical final march and, above all, the “foxtrot de las gatitas”, starring the beautiful Luisita Wieden, accompanied by the second trebles of the company.