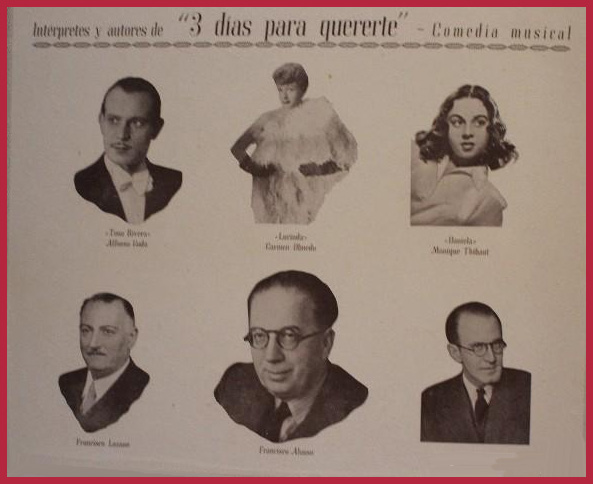 Synopsis: Tono Rivera is a handsome and young motorcycling champion admired by women, although he thinks that to love and then forget a woman you only need three days. Pirulo Campeche, another nice young man, tells him about his cousin Lucinda, a provincial lady who has fallen in love with Tono after having seen his picture published in the press. Tono assures that he is not interested in that kind of soppy sentimnetal girl and says that he prefers frivolous and carefree modern girls. Lucinda is disappointed when her cousin Pirulo tells her that Tono is not interested. Then she decides to introduce herself to Tono dressed in a modern way and pretending to be the kind of girl he likes. Tono gets excited and ends up falling in love with Lucinda who, in some rather comical scenes, provokes Tono’s jealousy. The latter finally ends up desiring a homey and traditional woman who knows how to make his life pleasant. It is then when Lucinda confesses that she is actually like that and that has been a pretence in order to get him to fall in love with her.

Tres días para quererte is the last of the 15 works from Francisco Lozano, working as a librettist and Francisco Alonso, who was responsible for the music, along with other occasional collaborators. This man’s inspiration gave birth to titles such as Las castigadoras, Las cariñosas o Ladronas de amor.

Three days to Falling in Love with You remained faithful to the basic elements of the genre: simple storyline, scenes set in exotic locations, striking scenery and costumes prepared by Víctor M. Cortejo, spectacular vicetiples and a first-rate vedete namely the Peruvian Carmen Olmedo, making her debut performance in Spain.

To these ingredients, which were blended brilliantly by the expert librettist, we must surely add the musical contribution of Maestro Alonso: cheerful, catchy, varied, well instrumented and modern. Of the numbers of this comedy, all of which were encored on the day of the premiere, the “Cuadro California”, a tango-song and the theme “You say I have heart of fire” and a pleasant and original “march of sports” came in for the highest of praise.

In 1998 the record company Blue Moon, in its collection Serie Lírica, released on CD Tres días para quererte and Róbame esta noche, with remastered recordings of the time.