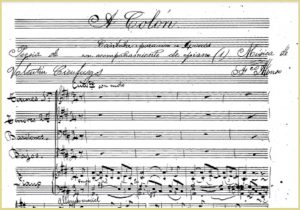 Cantata for chorus with four voices (two tenors, baritone and bass) and piano, with text by V. Álvarez Cienfuegos and Cobos.
Composed in Granada, on March 9, 1906, it was awarded a prize at a competition held at the Real Economic Society of Friends of the Country, of the province of Granada in that same year.

Dedicated  “To Columbus …” and can be performed vocally, as is stated in in the original manuscript.