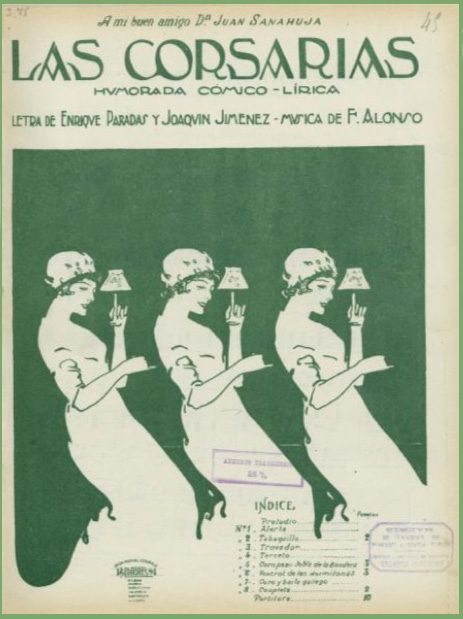 The raffle is won by the ugliest lady corsair, but she has lost her ticket and besides who Fray Canuto really likes is Angelita, waitress of the Bar de la Illusion. But all happiness turns to disappointment when it is discovered that Fray Canuto is actually Serafin, and is married and has seven children.

This light-hearted and frivolous work presents, in a way, the world upside down: women harass and seduce men, and these are raffled off by these young ladies as mere merchandise. Among them there is no jealousy or tension.

The Lady corsairs was one of the first great successes of Francisco Alonso thanks to a punchy music of significant impact. Several numbers were applauded, among them the “Pasodoble de la banderita”, which genuinely became a true anthem of the army. The Spanish soldiers marched towards Morocco singing this march, and even nowadays you can hear it in most of the parades where it is used to help the marching troops keep to the rhythm and therefore march in unison. His success was so great that Francisco Alonso was decorated with the Great Cross of Alfonso XII.

It has been performed more than a thousand times in a row in Madrid, more than three thousand in Buenos Aires and, in Valencia, was staged at two theaters simultaneously.