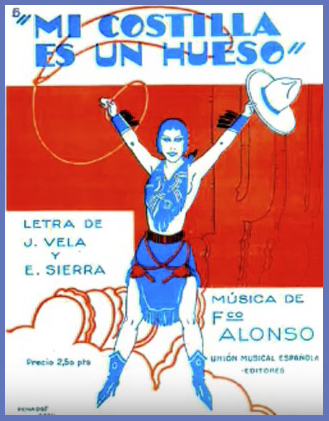 Synopsis: Nicéfaro makes a pledge to an association that rewards feminine virtue that he will make a married woman, to be chosen, be unfaithful within a year.

An ugly woman, owner of a toy store whose husband claims to be a Russian duke to sell more toys in his business, wins. The husband agrees, but replaces his wife with a vedette, who is his lover.

After several scenes in which the protagonists travel through Madrid, Barcelona and California, the subterfuge is discovered and the curtain is lowered.

The press of the time highlighted the way in which Alonso had adapted the music he had written to the orchestra, where he had used for the first time the vibraphone and the banjo. Other elements worthy of note for the critics were the the good taste with which the presentation was staged not to mention the grace of a particular number that parodied the Russian opera.

Among the musical numbers that were most applauded that were the ones titled “Muñequitas de rag”, another starring cowboys, that went by the name of “Girls of the bar”, the one of the “modistillas y estudiantes”, the aforementioned “Russian parody” and two that were obviously inspired by Madrid: “Las mañanitas del Retiro” and “Chotis de Nicéforo”, which immediately became very popular.

With regard to this work, the newspaper El Progreso de Barcelona commented the following in its chronicle of November 11, 1932: “We can assure, without fear of contradiction, that the work premiered yesterday at the Comic Theater will run and run for a long time, since it encompasses all the requisite ingredients to be a long term success. “The first number of the “Bobín” was repeated before the insistent applause of the public, then came the chotis “Nicéforo”, whose lyrics and music were an instant succes. In the dance “Hawaii”, the couple of dancers having who having been rapturously applauded, had to give an encore. Gloria Guzmán (replaced by Emilia Aliaga in later dates) received ovations for all her spots, especially in the “Californian Song”. The work ends with scene “cowboys”, offering in that number a clamorous ovation to Maestro Alonso, which forced him to come out onto the stage to receive the appreciation of a very insistent public”.

Also in the middle of the second act, when performing the orchestra the pasodoble” La modistilla “, another of the numbers that would soon become popular, also forced the Maestro to come back on stage, who clamoured for by the audience went out to receive new applause. The comic scene of the “Russian Song” had to be repeated three times, and the great presentation of the final scene ? “Green and Silver” is one of those that are remembered with great nostalgia.”

Currently, two recordings of this work can be found on the market. In 2000, the label Blue Moon, in its collection Series Líricas, edited as Doña Mariquita de mi corazón and My rib is a bone, remastering the original recordings of that time. There is also a recording of Sonifolk in his collection La Revista Musical Española. Vol. 3., which includes the works My rib is a bone, 24 hours lying and ¡Taxi, al cómico!