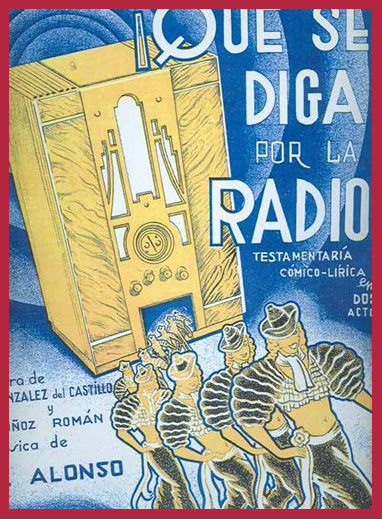 Synopsis: Mr. John, a wealthy New York banker, on his honeymoon, finds his wife making love with the elevator operator in the hotel.

Manolo, a friend of his, finds the situation so amusing that he composes a cuplé about it.

When Mr. John dies, he leaves his fortune to Manolo, but the latter is not eligible for this inheritance if he is able to marry Mr John’s widow and is not cheated on by her within six months. Manolo and his nephew Gumersindo will organize an incredible imbroglio causing the former to divorce his wife Nelly and marry Lupe, a Cuban singer who allows herself to be caught up in this game.

For what was a fun, cheerful, witty but rather convoluted book, Maestro Alonso composed a somewhat direct punchy style of music, which itself was colorful and representative of many of the places where the action takes place, which gave the Teatro Martín one of its great nights, the “temple of the Variety show”, one of its great nights .

All the musical numbers were repeated and most enthusiatically applauded were a pasodoble and a chotis, a fox, a mellow danzón and a rumba with a curious twist, not to mention, a distinctively Creole feel. Also well received were a waltz and a march of hussars, which illustrated the Viennese atmosphere that appears on the stage.