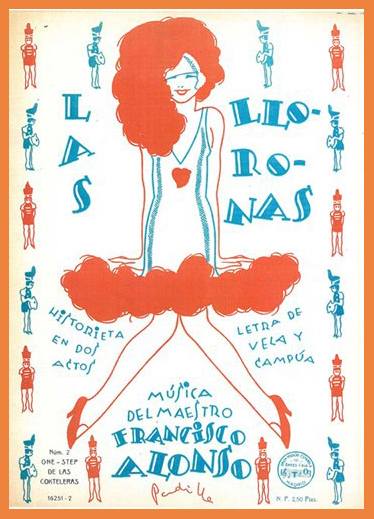 Synopsis: Agripina is the manager of a spa specializing in treating hypocondriacs (the weeping women). To cure them, she recommends music, sports and love. The story tells us the grotesque and humorous adventures of a young man from Madrid, who by a quirk of fate is a now a bona-fide ‘nouveau riche’ and stepfather to a happy and confident young girl, which leads him to set about the task of overcoming difficulties at a lively spa of pleasure-seeking women
“La Lloronas” mixes elements of vaudeville and variety show and is discreetly picaresque, with jokes of good taste,far removed from the vulgar humor that similar works often served up.

Among the joyful musical numbers of the genre, written by Maestro Alonso, the audience applauded with special enthusiasm the “Foxtrot of the hotel rats”, the sensual “Java of the frame”, a nice “March of the lead soldiers”, the “One-step of the shakers “, the” Foxtrot of the recipe”and the” Charleston of the penguin “. Of course, there also was a graceful chotis and a pasodoble, executed at the pace of military march.
The set was spectacular with costumes by Álvaro Retana and scenography by Bulbena, Marcén and Muela.

The success achieved by “Las Lloronas” in Teatro Carretas brought with it, on November 16, 1928, the famous banquet of tribute to the authors, which was attended by more than 300 guests, among whom the illustrious Amadeo Vives made his presence felt.