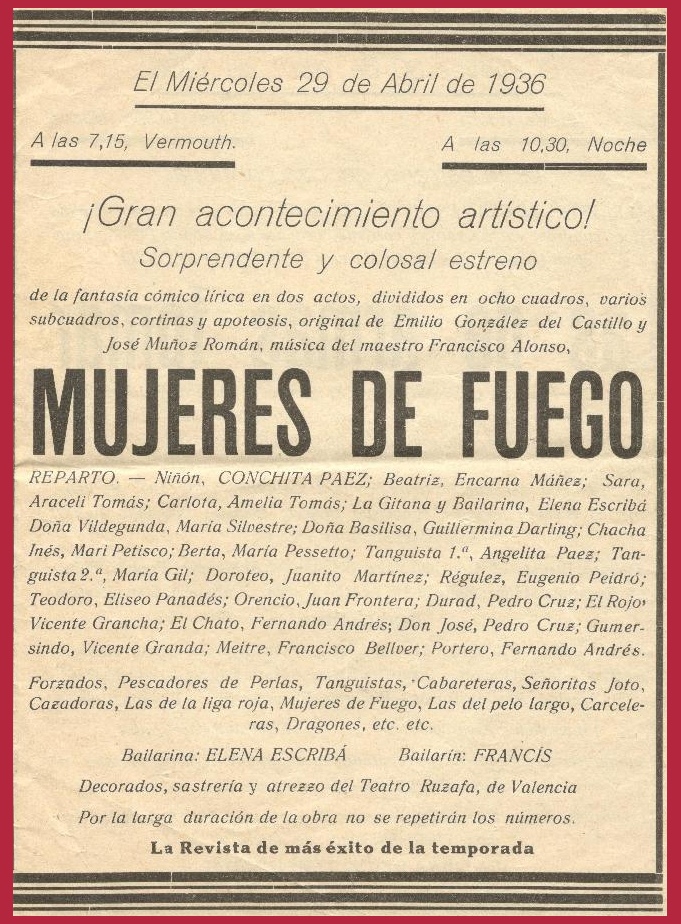 Synopsis: The story of Women of Fire revolves around the idea of a factory of artificial women, but with all the attractions of women of real flesh and blood, but without any of their disadvantages.

The variety show is a musical genre of very specific characteristics, that the librettists José Muñoz Román and Emilio González del Castillo knew how to manage with great competence: a simple central focus that connects situations and fantasy scenarios and the inclusion of jokes which predictably played on misunderstandings. To this we are duty-bound to add the spectacular nature of the scenery, the indisputable beauty of the vedettes, vicitiples and dancers, the costumes of the ladies not to mention the ridiculousness and extravagance of the men.

The music also responds to some known models: it need be catchy, brilliant, based both on the classic rhythms of chotis and pasodobles, as well as on the new ones that come to the Madrid scene from America (foxtrots, sambas) or from exotic countries.

Women of fire has many scenes and a lot of music. On the day of the premiere, a waltz, a habanera (“La mata de pelo”), “Java de las muñequitas”, an “apache dance” and the most spectacular: a pasodoble sung by “cigarreras” which evokes the famous opera Carmen were all greatly applauded by the audience

Two curious pieces of trivia: The first, that on the posters it was announced that none of the numbers would be repeated, contrary to the customary practices. Despite this, Alonso was forced to repeat the one of the cigar makers at the insistence of the public. The other was that, at a given moment, one of the young ladies came down to the seating area and took a photograph of the audience, a photograph that was projected on the stage at the end. In this respect, one newspaper advised of the danger that this supposed for those men who had lied to their wives saying they were staying at the office but were actually enjoying Martin’s show.