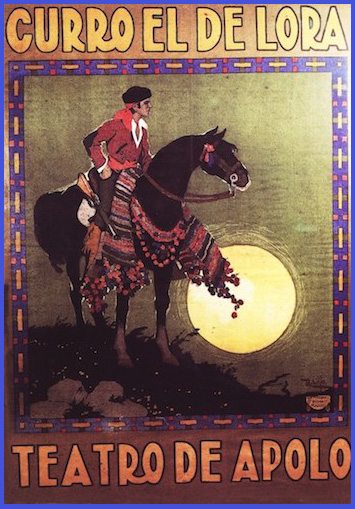 Synopsis: In a Cordoban farmhouse, Lola, Trini and other characters attend the selection of bulls. Trini, whom Richemond (a strange individual of French origin) intends to conquer, is suddenly attacked by a bull and saved by a mysterious man who turns out to be Curro, Lola’s ex-lover. At this point however the old lovers despise each other.

In the second act, Lola and Trini are imprisoned in a cave, but manage to escape. Curro feels attracted again to Lola, but knows she has another suitor. Trini and Richemond decide to get married and, during the wedding, Curro and Lola’s old love is rekindled.

Curro el de Lora, in spite of its undoubted musical value, passed by rather unnoticed at the time and sadly only played for a mere fifteen days.

The action is set in Cordoba around 1847, which allowed for the incorporation of legendary and popular Andalusian personalities, such as the man who is on the run from the law for the love of a woman.
Everything in Curro el de Lora responds to the noble purpose of making a great work of art based on popular elements of local culture. We find ourselves witness to graceful music and orchestral elegance in which the Andalusian copla reigns supreme.

On September 8, 2007, Curro de Lora was re-released at Teatro Monumental de Madrid. A CD and a DVD recording the live concert were immediately published on the RTVE-Música label. The heirs of the composer and the Orchestra and Chorus of RTVE made this recovery possible, in which the General Society of Authors and Publishers, the Foundation of the Spanish Zarzuela and KL Opera collaborated in the artistic production.

According to Juan de Udaeta, responsible for the critical edition and conductor of the recording, Curro de Lora was a much-loved project for maestro Alonso, since he intended to start a series of more ambitious works that would have aimed to recover the zarzuela but on a wider scale.

Seldom in the scenarios of zarzuela is a score as worthy of applause such as this, which highlights the “Romanza de Curro”, and the “Romanza de Lola Cortés”, with which the protagonists are introduced, important pages, typical of the large zarzuela that they require artists with great vocal resources. After these interventions comes a particularly powerful duet. In the second act, Curro reappears in a passionate “Raconto”.

Another exciting moment is a flamenco scene performedby Angustias, Curro’s mother, who curses Lola. And the end, great, with the intervention of the orchestra, the choir, a children’s choir that takes place in the Cathedral of Córdoba, during the wedding of Richemond and Trini and in which another passionate, intense and dramatic duet is delivered by the leading protagonists and culminates in their becoming renited again.

The comic part is comes via Trini and Richemond, and who offer a charming number at the end of the first act, the so-called “Tango del Kikirikí” which could only be described as lighthearted and cheerful and yet impudently playful.

Download hand book  from its premiere at Teatro Monumental