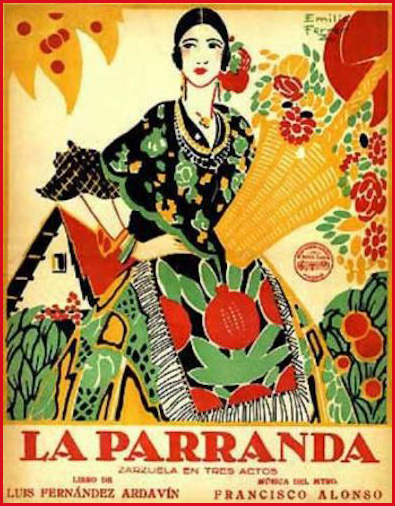 Synopsis: Aurora is courted by Miguel, a potter who works with her in Manuel’s workshop, who is also interested in courting Aurora. She rejects him and she is fired, as is Miguel, who jumps to her defence. Aurora is a timorous young woman because, unbeknown to everyone else, she is married to a man who was imprisoned the very same day of their wedding for having committed a crime. The news that the husband has died in prison comes at the same time as the Pope’s declaration that this marriage is null and void: Aurora is now free to marry Miguel.

La Parranda was the work that consoidated the prestige of Maestro Alonso, cemented three years before with La Calesera. His direct, catchy, popular music, composed to fully showcase the brilliance of the singers, is still appreciated by modern day fans.

This piece enjoys simple plot and yet extols the beauty of the Murcian landscape, the nobility of its people, and the deep roots of its traditions.

Luis Fernández Ardavín wrote a text full of magnificent verses that receives effusive applause, especially when the zarzuela was premiered at Teatro Romea, in Murcia.

The score of La parranda is one of Alonso’s best and includes numbers that seem to reflect the atmosphere and light of the Murcian region, such as the “Choir of botijeros”, the “Ronda de las solteras”, and the love for tradition in the “Salve de Auroros”, attractive and musically very elaborate page.

They also highlight the “Duo of Aurora and Miguel”, the charming “Terceto comic” from Carmela, Retrasao and Don Cuco and the “Coplas del quisiera”, in which Retrasao gives advice to the newly-married Aurora. And, above all, the “Canción del platero” and the baritone romanza “Canto a Murcia”, an intense and brilliant page that has become a popular anthem of the region, a music capable of arousing a Murciano’s patriotic feelings for his homeland.