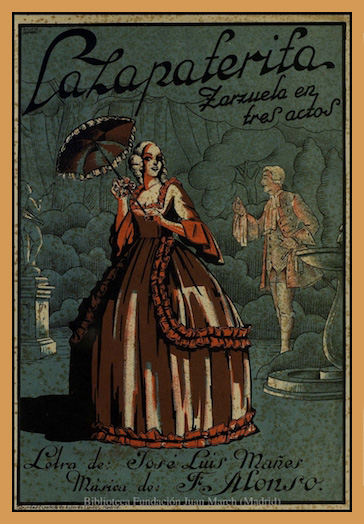 Synopsis: Located in Madrid, during the reign of Carlos III, is based on the adventures of the famous Venetian knight Giacomo Casanova, who falls in love with a shoemaker’s daughter Manola who, despite this and her interest in sais gentleman, will resist his charms and will end up marrying for the right reasons. The honesty and the modesty of an honourable woman wins out at the end of this work.

Set in the 18th century, the music of “La zapaterita” alternates pavanes, minuets and gavotas with pasodobles and dances from the 20th century, which demonstrates Francisco Alonso’s compositional versatility. If we add to this the brilliant and rich orchestration and the many melodies, we must conclude that “La zapaterita” is one of the last great zarzuelas.

The score is, without a doubt, one of Alonso’s finest. There are several recommended musical numbers that can be recommended from this zarzuela; among them the descriptive “Noche madrileña”, the scene between Casanova and the ladies of the court, the Duo between Manola and the Venetian knight, the presentation of “the knights in the square”, with its rather courtly feel, the famous romanza “Caballo bayo” and , above all, the martial relay of the guard, which was enthusiastically applauded on the night of the premiere.

An anthology of the production of Maestro Alonso would have to include several of the scenes of La zapaterita, because this work is a composition of great melodic and symphonic success.