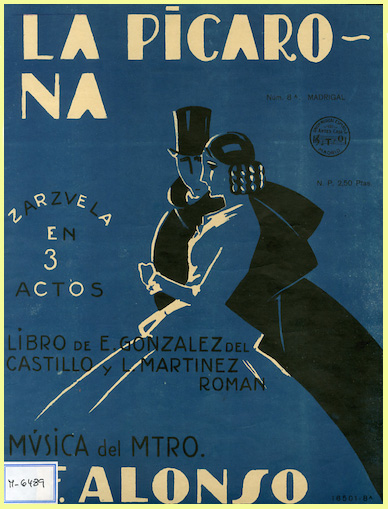 The first act is developed in the town at harvest time, with the consequent joy, increased with the arrival of a young man who has been in Madrid for a long time. In love with a young widow, he brings a very fashionable bustle from Madrid: it is a pillow to decorate the back of the ladies dresses, which causes a beautiful song: “Polisón … polison”.

Shortly after they arrive at the house of Mayor Montiel some people announcing the visit of Maribel, who, having broken the car, asks for accommodation in the mayor’s house. It is a group of disguised bandits, specialized in plundering houses of wealthy townspeople. Ginés, the fourth member of the group, arrives a little later and manages to be housed thanks to his fortunetelling skills.

The return of the reapers encourages the evening; Maribel, impressed by the person of the mayor, prevents that projected wrongdoing is committed that same night.

In the second act Montiel is showing his properties to Maribel; a captain of the capital arrives to beg Montiel to return to lead the revolt, which reveals to Maribel the true personality of Montiel, actually a Marquis away from Madrid for political reasons. His admiration for Montiel is increasing as well as the demands of his cronies. A scene of love between Ginés and Maribel is discovered by the mayor, forcing Maribel to confess her true intentions; meanwhile, all the people have discovered the presence of the evildoers and come asking for justice.

The third act takes place in a pilgrimage; the bandits have managed to flee and mix with the pilgrims; Montiel is looking for Maribel and when he finds her, she asks for clemency for her companions. Finally, the news of the triumph of the revolution allows Montiel to grant amnesty to the bandits.

This zarzuela includes some moments which would be comparable to those of the Central European operetta, such as the famous “Mazurca de polisón”, entrusted to Fuencisla and Frutos, or the film music in the famous “Canto a Segovia”, which Gines waltzes brilliantly whilst accompanied by the choir. Other noteworthy moments that stand out include the concertante “Campos, los de Castilla” such as the duo between Maribel and Ginés (“De una mujer, cuando llora”) that demands of the tenor genuine virtuosistic quality, or the duo between Maribel and Montiel, the intervention of Fuencisla in “Alcaldesa me han nombrado”, and even the last appearance of Ginés in the romanza “Bajo un sol que los tortura”.