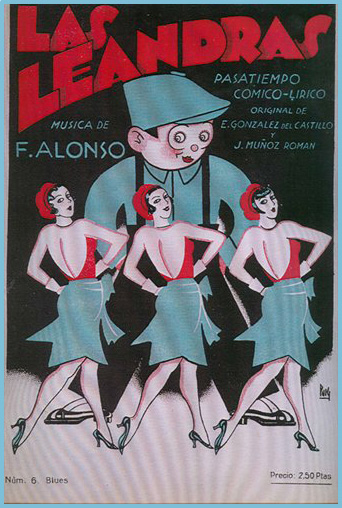 Synopsis: Concha, vedette of a variety show company, faces a serious problem: her uncle and tutor, who thinks that she is in a boarding school, announces their imminent visit. Problematic since if the uncle finds her working in the world of theater, he will disinherit her.

Leandro, her boyfriend, has the idea of opening a fake school of which the company’s members will be students and teachers. The school is called “Las Leandras” and is in a small hotel, formerly a dating house.

The school is attended by several young women who are accepted as students. Among them is Fermina, a small-town woman who is getting married and whose mother brings her to the school to get her ready for her wedding night.

Francisco arrives later, a former client of the hotel, with his nephew Casildo so that in the “school” he can be taught how to treat a young lady.

They all mistake the newcomer for Don Francisco, Concha’s uncle, although he is in fact Fermina’s father. When the real Uncle Francisco arrives and tries to embrace his niece, Leandro, who is jealous, fights with him. Almost simultaneously, Francisco discovers Manuela, his wife, who is accompanying Fermina.

The confusion of characters becomes clear at the end, after some deceiving twists in the plot.

This is such a spicy work (some called it indecent) and ‘imbroglio’ that exploits the double- entendres and in various situations.The work was the theatrical success of the 1930s. Celia Gamex afforded herself all the luxury and rigour that she herself demanded from her “boys” and choristers.

It was a success throughout Spain, and over 1.800 consecutive performances were staged and continues to fill theaters every time it is revived.

Of his ten musical numbers the “Song of the widows”, the regional number “Canary Song”, the exoticism of “Clara Bow” were the ones that were greeted with the most enthusiastic, with which the Alonso displayed once again his knack for making make music fashionable… but, above all, the success was resrved for the chotis “El Pichi” and the pasacalle of “Los Nardos”, which could very well become the anthem of Madrid.
Since its premiere, Las Leandras continues to be performed continuously in Spain and South America.