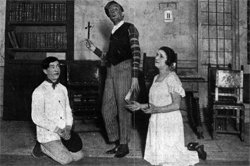 A review of the time summed up the work: “A flamenco singer-songwriter become a sacristan and organist, all at the same time; the parade of several funny and well-structured characters, in the context of a sacristy; three numbers of maestro Alonso, so typical of his work, and therefore, after an flawless interpretation, were thus repeated to rapturous applause . This is the new sainete that has been greatly applauded and laughed about “
Among those musical numbers, of flamenco inspiration, a sentimental duo played by the main couple, and another number with singing and dancing, drew special attention from the press.