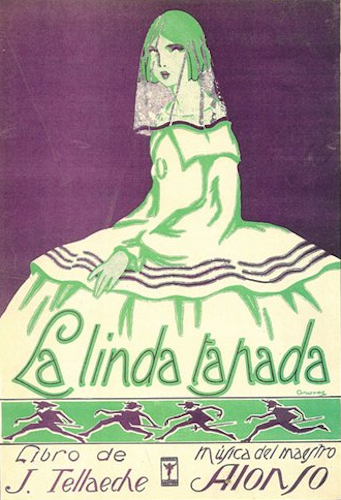 Synopsis: A Portuguese lady is in love with a captain of the Thirds of Flanders follows him to an inn in Salamanca, where she appears but hidden behind a veil. In the inn she manages to arouse the soldier’s interest, and with the help of a married couple of rogues, has to avoid the harassment of the Corregidor (magistrate), who is helped by the sheriff and the innkeeper. The “linda tapada” finally wins the love of her beloved Captain.

Located in the Salamanca of the early seventeenth century, among students and rogues, the entertaining libretto of La linda tapada develops a classic sentimental story of entanglement, common in the Spanish classical theatre, but it was the music of Francisco Alonso which was really responsible for the success of this zarzuela, which contains moments of great inspiration.

The composer from Granada resorted to popular music (jácara, pavana…) to better acclimatize the work to the local setting, thereby showing his creative abilities and the freshness and grace of his inspiration.

Among the twelve musical numbers of La linda tapada, the “Pasacalle y jota de estudiantes” attracted particular attention and, above all, the Song of the Gypsy, full of passionate nostalgia